Xiaomi has released its quarterly financial analysis and the numbers show a significant decline. Revenue for July-September 2022 was CNY70.5 billion, just under $10 billion. Of these, 50.5% came from foreign markets.

Turnover is 10% lower than last year. Net income fell even more – 59% year over year to CNY 2.1 billion ($294 million). However, this was partly due to the investment of CNY 829 million (US$116 million) in the newly established electric vehicle business and other projects that are expected to bear fruit in the future.

The company also revealed that R&D investments are up 25% from a year ago, and 48% of its staff work in R&D departments. 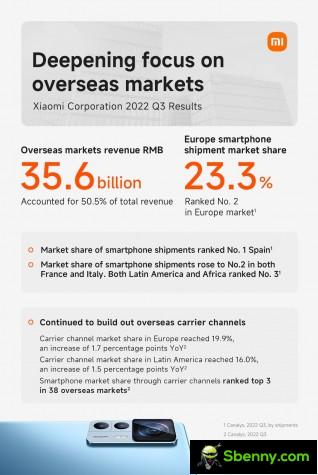 Xiaomi users in the MIUI universe have reached 564 million, 78.1 million more than the same period last year, with an annual increase of 16%. Interestingly, only 141 million of them (about 25%) are in China.

The company pushed 40.5 million smartphones in the third quarter of 2022, and while maintaining its third position in the world, shipments were down 7.8% on the year, with revenue down 11.1%.


The post continues on our Blog: Xiaomi’s third-quarter financial report reveals a 10% drop in revenue.

Top Smartphone Reviews of the Month