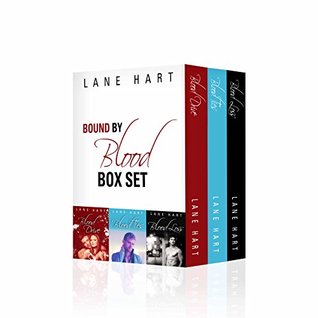 eBook Description:
WARNING: THESE ARE THREE STEAMY PARANORMAL ROMANCES INTENDED FOR MATURE AUDIENCES 18+ ONLY DUE TO THE EXPLICIT SCENES AND ADULT LANGUAGE.

Book One - Blood Drive
Every year, the Fourth of July holds it's own significance for Sam West. It marks the day, fifty-eight years ago, when a vampire saved his life from imminent death, making him nearly immortal.

So where can you find Sam today? Probably the last place you'd ever think to look for a vampire.

Sam has grown lazy when it comes to his lifestyle and women, but that all changes during a college blood drive, when fate introduces him to the shy, sweet and beautiful Kate. Sam instantly falls head over heels for Kate, and is blown away when he uncovers the dangerous secret that even Kate doesn't know about herself. Her secret is the key to his roommate, Chris's, unfortunate dilemma, however Sam could never have predicted the explosive chemistry that erupts between Kate and Chris.


Book Two – Blood Ties
Tom Adams is surrounded by an evil force that's sucking the life out of him a little more each day - his conniving new wife Vanessa, and his uncaring, belittling mother. Stuck on a path he hates and never actually wanted, he jumps at the opportunity to leave Pennsylvania and embark on an investigation to look for supernatural beings in North Carolina.

Tom wanted to become a D.R.A. agent to hunt down and kill dangerous monsters, like murderous werewolves or molesting vampires. Instead, he's asked to find two young siblings, who are wanted by his agency solely for the fact that they're suspected to be a witch and warlock. Unable to condemn two innocent people to death, he's on a mission to find them before his supervising agent does, and tell them their lives are in danger.

Elizabeth Maddox is having a difficult time dealing with the loss of her mother. It doesn't help that her twin brother Jason is expressing his grief by experimenting with magic to channel his anger. Jason's unstable, and Elizabeth's worried he's going to hurt himself (or someone else) with the spells their mother always forbade them from using.

One morning a mysterious, familiar looking stranger wanders into Elizabeth's section at the restaurant where she waitresses. She forgets everything else and is instantly captivated by his sex appeal and charm. Tom makes her feel things she's never experienced before, and leaves her wanting more after their first mind-blowing kiss. However, Elizabeth has no idea that not only does Tom know exactly who she is, but what she is as well.

Tom never expected that the woman he was looking for would turn out to be the one he'll give up everything to have. He's ready to throw away his sham of a marriage, his career with a murderous agency, and anything else it takes to be with Elizabeth. The only problem, he doesn't know how she'll react when she finds out he's lied to her, and that he actually works for the agency that wants her and her brother dead.

Book Three – Blood Loss
After unexpectedly losing his mother in a car wreck, and then his sister just nine months later in childbirth, Jason Maddox has been living alone in Washington D.C. In an effort to stay hidden from the D.R.A., he decided to become a police officer. Occasionally, he even uses a few of the tricks up his sleeve to help him catch criminals.

When his crime fighting leads him to Cynthia Taylor, he’s willing to do whatever it takes to keep her safe, even if that means keeping her away from him. Letting her go is going to be even harder than he imagined, especially when fate has plans for him that include Cyn.

With a ragtag team of warlocks and vampires, Jason agrees to take out the D.R.A.