Power Piggs of the Dark Age 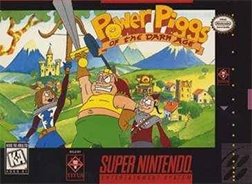 Description: Ready to pig-out on action-packed adventure? Hungry for a dozen magic donuts? Then Power Piggs of the Dark Age is the game for you!

You'll take Bruno--a Pigg who's co-owner of a donut shop in the Dark Age--on an incredible sword-swiping aventure through the hilarious Kingdom of Pigg!

When the Wizzard of Wolff attacks his peaceful Kingdom, Bruno is forced to use exploding jelly donuts and his mighty sword to defeat the howling intruders. And when he's not floating in air geysers called -blow-holes- he's busting-open prize-filled boxes with his big fat, well, er... hams.

Will the Wizzard's wacky wolves win?

Can the cunning cruller-cookers conquer?

It's all up to you in this non-stop romp through medieval cities, bizarre forests, the Wizzard's castle, and more donut holes than you can shake a sword at.

You'll grunt with glee while you wallow-away the hours playing Power Piggs of the Dark Age!