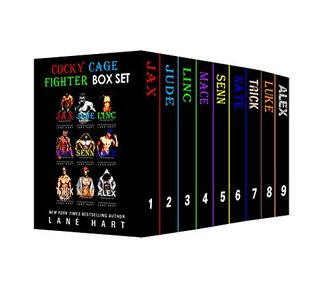 eBook Description:
For the first time ever, get the complete nine book Cocky Cage Fighter series in one box set!

~ JAX ~
MMA Middleweight World Champion, Jax Malone has just entered the fight of his life. .
Newly admitted attorney Page Davenport is willing to do anything to finally prove herself in her father’s law firm. Anything except represent the infamous miscreant, Jackson "The Mauler" Malone.
Page and Jax struggle to work together, engaging in a knockdown drag-out fight for dominance. When they finally stop taking swings at each other, they're both surprised to realize that sometimes first impressions are completely wrong.

~ JUDE ~
MMA cage fighter Jude Malone leads a simple life - eat, sleep and train. While Jude's had his fair share of recent losses, he's better than his record. He just needs a chance to prove it.
When Jude is offered the fight of a lifetime by his head coach, there is only one tiny string attached. But that little string just might turn out to be the one that unravels him completely.

~ MACE ~
Mace fell for Hailey the moment he laid eyes on her, before he knew about the three King Kong size battles he would have to fight to be with her.
By the time Linc warned Mace that his gorgeous sister with legs a mile long was off limits and “emotionally fragile,” it was too late. There was no turning back.

~ SENN ~
The woman is pure evil.
Tiny, sexy, manipulative evil.
I can’t even blame my stupidity on alcohol. There was only half a beer in my bloodstream when I agreed to get into that cab with her.
Nobody, especially Linc, can ever find out that I broke the bro code and slept with his ex-girlfriend, Abby.
Everything was going great, until a few months later when she called and said the two words that set me up for the biggest fight of my life – “I’m pregnant.”

~ NATE ~
Burdened by his guilt, Nate’s unable to let go of his painful memories. He keeps to himself, refusing to let anyone else in for fear that they’ll learn the truth.
When a nosy reporter starts investigating his past, the skeletons Nate’s kept locked up tight in his closet start to rattle, threatening to surface and ruin him.

~ TRICK ~
The fairy tales have it all wrong.
Cinderella didn’t fall in love with the prince. He was nothing more to her than an easy escape from her sh***y life.
How do I know? Because in this twisted Cinderella story I’m her long-lost stepbrother.

~ LUKE ~
Have you ever loved someone who is completely wrong for you? God knows I have.
But in my defense, I fell for Megan Warner years before my older brother Eli ever noticed her, before he asked her out and made her his.
After four long years without a word, Megan has moved back to Cary, North Carolina but she’s not alone. She has a three-year-old son and I think there’s a pretty good chance that Megan’s son is actually mine.