Name of the eBook you are reviewing: Harry Potter and the Cursed Child 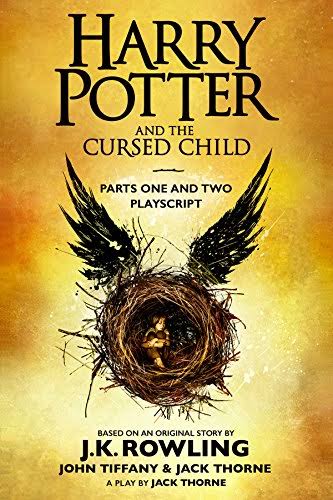 Harry Potter and the Cursed Child is a British two-part stage play written by Jack Thorne based on an original story by Thorne, J. K. Rowling and John Tiffany. The story begins nineteen years after the events of Harry Potter and the Deathly Hallows and follows Harry Potter, now a Ministry of Magic employee, and his younger son Albus Severus Potter, who is about to attend Hogwarts School of Witchcraft and Wizardry.

Review:
If you've read Harry Potter series (seven books) or watched the movies (eight movies), then you already know about the wizarding world of Harry Potter. In this book, Albus Severus Potter begin his first year with Scorpius Malfoy, as they become a friend despite their parents history.


The novel is divided into two parts with two acts for each part, showing the events unveil to Albus. With his personality that somewhat similar to his father's, Albus appeared to have a need to prove himself and distance himself from his father's shadow. However in the end, he proved to be more like Harry than he knew.

The plot is always full of surprises, as you can see throughout the book. Anything about magic is wonderful, however, as someone who loves magic and extremely a huge fan of Harry Potter, I'm disappointed with the storyline. I love nothing more than to see another story of Harry Potter Wizarding World once again, but this book contains a lot of contradictory to the original books, the canon theories. If one theory can change, then what happen with the rest of them?

As a person who likes to read, i have too much expectation to this book because i love anything about Harry Potter. If J.K Rowling said it is a fanfiction that become a stage play, instead an official sequel of Harry Potter, i'll probably love it. But it is not. So, maybe this is what makes me disappointed and mad.

Overall, if you never read the original books and just enjoy the movies, i think you'll like it. Maybe.

Would you recommend this to other users? I would not recommend it to Potterheads, but for someone who likes and enjoying Harry Potter and they're not a huge fan, you can try read it. And for the play, which i never see it, i don't have an opinion on that. Maybe someone can tell me later.

Love and hugs from a fellow Hufflepuff.
#KeepTheSecrets

Just finished it few days ago and wow....that was a really amazing review! It's basically summarize what most fans feel about the Cursed Child
And Yep, the book basically break its own universal rules. And the fact that J.K confirmed it to be canon on her tweet really piss a good chunk of fans off.
Heck i can make the list of what when wrong but i don't really want to spoiler it and there just too many.... probably.

Thank you! I never thought someone will like it. Sometimes i want to spill the tea but like you said, there's too much happening. I'm glad you enjoy the review

I agree whole heartedly I was super excited to hear about a new book but it was so.... Bland to me I was disappointed from the start I feel like she wrote this for the publishers and not for the lovers of Harry Potter these books were my safe place and I feel almost heart broken that she felt the need to go this far...
I

Hope I get to read it soon..nice review by the way
M

Read this book a while back, suitable for people who are big fans of harry potter but i still think the other books are better. The plotline wasn't as exciting as the others.
Change Language